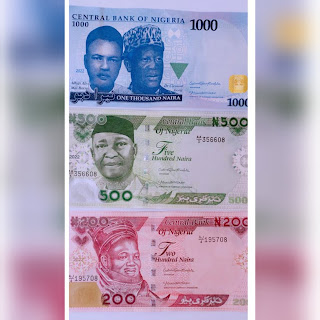 The Central Bank of Nigeria (CBN) will begin distributing New Naira notes to its branches across the country today.

"We will begin distribution to CBN branches across the country on Thursday, that is tomorrow (today)," he said. So that when we do launch, perhaps at a later date, we already have notes all over the country."

The new notes are expected to enter circulation on December 15, and will coexist with the old notes until January 31, 2023, when they will cease to be legal tender.

Mr. Umar, on the other hand, stated that the apex bank was concerned that the rush to deposit old notes has not yet been seen, as anticipated.

He revealed that as of Friday, last week, only N165 billion had been deposited by banks with the CBN and that even some of the banks with high customer-base records had not made any deposit.

Under the policy, the CBN expects to mop up about N2.7 trillion held outside the banking system, out of the N3. 2 trillion in circulation.

According to the director, “When we designed this policy, there was about N2.7 trillion outside the banking system, out of the N3.2 trillion in circulation. As at Friday last week, 18th November, the total deposit that we have received from the banks, was the sum of N165 billion. Which is still small.

“We are not seeing the rush. Some banks have not even made any deposits and some of them are banks with large customer-base. In fact, the Director Banking Supervision had to bring it to the notice of the Inter-Agency Committee, yesterday.

“It is a problem for us and we are hoping that it does not result in a stampede when we are getting close to the end of January.”

The director said that the CBN had extended its work days to Saturday and that the bank’s branches were opened to receive deposits from banks.

He added that the apex bank has also waived charges and removed all limits in terms of the amount of money that a customer could deposit in his account, adding that there was no reason for anyone to be afraid to deposit their monies in their accounts.

The Director of Corporate Communications, Mr. Osita Nwanisobi, assured that centres would be created for rural, unbanked members of the public to change their old notes.

He added that the Shared Agent Network Expansion Facilities (SANEF) has over 1.4 million agents across Nigeria to address that concern, adding, “Such that even where people don’t have bank accounts, they will still be able to change their money and we are going to be doing that within the next few days.

“The CBN is very mindful and has said that we will do whatever needs to be done to enable them to change whatever money they have.”

Earlier, the Director of Policy, Dr. Mahmoud Hassan explained that the Monetary Policy Rate was raised on Tuesday as part of the efforts to achieve price stability.

He said that the apex bank was determined to close the gap between the interest rate and the inflation rate but won’t do it in one stroke, in order not to harm the entire macro economy.

His words, “We’re looking at so many things simultaneously. While we’re tightening, we’re also aware that it’s impacting on growth, the cost of credit is going to increase. So the cost of doing business and the cost of production will increase. And by extension, people will say, well, that will also fuel inflation.

“We did only 100 basis points, but we know that the market is currently very tight and the banks are already crying. Now we do naira redesign. That will also sterilize a lot of that money.

“So we’re moderating and that’s why we said this MPR increase is a moderation. So let’s allow the economy to have some breathing space to recoup from that tightening. And this will just be for that signal, that we’re still looking at the inflation numbers. And we really need to narrow that down very quickly. But we cannot close the gap at once.”