Eight years ago, Louis van Gaal led the Netherlands to third place in Brazil, but he thinks his team in Qatar is superior. 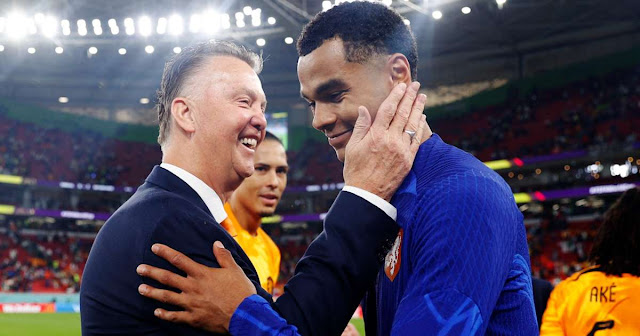 Although the Netherlands may not have the prominent names they did at the 2014 World Cup, Louis van Gaal believes his team's overall quality in Qatar is higher.

Eight years ago, Van Gaal guided the Dutch to the semifinals. This time, he was in typical good humour as he discussed the Netherlands' game against Ecuador.

The only members of Van Gaal's squad from 2014 are Memphis Depay, Daley Blind, and Stefan de Vrij. The other members of the Oranje's squad in Qatar are all making their World Cup debuts.

Although their squad lacks the leading lights of Robin van Persie, Wesley Sneijder and Arjen Robben that Van Gaal had at his disposal in Brazil, the Netherlands coach thinks his squad of 2022 has more to offer across the board.

With Germany and Argentina losing their first matches, there is the possibility of the draw opening up, and Van Gaal sees no reason why his team cannot capitalise.

"I didn't see all the matches, but the fact that Germany and Argentina lost is somewhat telling, but I always say it's easier to defend than it is attack," he said in a press conference.

"I heard that Germany missed a lot of chances and then they lose. This has got to do with team discipline. This is why I say this group is great.

"They're the ones who have to put it into practice, execute my instructions for 90 minutes. If they don't perform as well, you put in the next player who will do his utmost.

"We have an average quality higher than 2014. I'm not talking about the top players we had at the time, perhaps Memphis is at that level and might reach that level, and Frenkie de Jong perhaps.

"But then the matches were decided by players like Van Persie, Robben and Sneijder. That's just the way it was.

"Now in our squad we have a much higher average. Forwards like Memphis, [Steven] Bergwijn, [Cody] Gakpo. I hope that will be a pleasant surprise."

Depay only featured as a substitute against Senegal on Monday, with the Barcelona forward recovering from an injury and lack of game time at club level.

Van Gaal is unsure if the 28-year-old will be fit to start against Ecuador.

"With Memphis, he was training in Amsterdam and that was individual," he added. "Now he needs to train with the team.

"We've increased intensity, he's played 30 minutes now. He isn't grappling too much with the issues. We're proceeding with the next step, which is 45 minutes.

"We're trying to extend that because the injury he has makes it so difficult to decide when he can start.

"He's quite an extraordinary player, so I've set aside my principles because I consider him incredibly important."

With Gakpo and Davy Klaassen scoring in the win over Senegal, the Netherlands had two different players score in their first World Cup appearance for the first time since Wim Jonk and Gaston Taument did so against Saudi Arabia in 1994.

Depay is the only player to score in both of his first two World Cup games for the Netherlands, though Van Gaal feels PSV forward Gakpo, who is enjoying a fine season, has what it takes to become a superstar.

"He is a player with a lot of talent and potential, but he is young, and he's a player that's still developing, he has a lot of room for improvement," Van Gaal said.

"He's a personality to do whatever it takes. It is possible that he can become a star."