Synopsis
Luis Suarez's fourth World Cup ended in him making a series of claims of injustice as Uruguay were condemned to a dramatic group-stage exit. 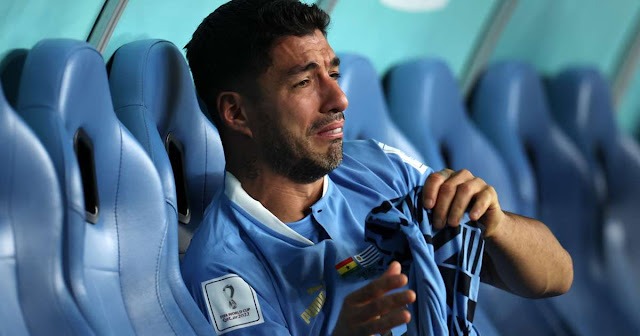 As his World Cup career ended in tears and a group-stage loss in Qatar, Luis Suarez alleged that FIFA "is always against Uruguay."

The former striker for Barcelona, Liverpool, and Atletico Madrid participated in the 2-0 victory over Ghana on Friday, which was made possible by a brace from Giorgian de Arrascaeta.

Before the game's conclusion, the seasoned Suarez was replaced, and he watched helplessly as Edinson Cavani was wrongfully not given a late penalty after tripping in Ghana's 18-yard box.

Suarez thought that was a valid argument, and he also thought Uruguay ought to have been awarded a penalty kick after Darwin Nunez was brought down early in the second half.

Nunez's incident was evaluated by referee Daniel Siebert on a pitchside monitor, but the match official decided it should not have resulted in a penalty.

Suarez was visibly upset when Uruguay's elimination was announced; South Korea had beaten Portugal 2-1 to advance to the round of 16, beating Uruguay by a single goal. If Uruguay had scored another goal, they would have surpassed South Korea for second place.

Suarez cited the controversial penalty that Portugal, the group winners, received against Uruguay on Monday as something that "affected" Uruguay's goal differential. Suarez continued by equating it to the events in the Ghana game: "The punishment for Darwin is extremely obvious. Edi's is in touch as well."

The world's governing body, FIFA, is being urged to "provide an explanation" on the reasoning behind penalty decisions, Suarez said. "They are not excuses, but fantastic things are happening in the World Cup," he continued.

After Ghana was defeated, he said he had also been stopped from returning to his family.

""When you see a Frenchman with his children on the replacement bench, someone from FIFA come to tell me no, and I want to go hug my family after the game," Suarez remarked.

"It would appear that Uruguay needs to be more powerful. FIFA consistently opposes Uruguay."

Suarez hoped for a flourish on the international scene as his playing career came to an end at age 35. Instead, a pot shot at the tournament directors marked the end of his tournament.

Even though he had to make do with a meagre consolation, winning in front of his young son nevertheless left him with a bitter aftertaste.

"To play in my fourth World Cup was a blessing. And before to the game, I considered my four-year-old son, who has yet to witness me win a World Cup game "said Suarez.

"He witnessed my victory today, but all he can seem to perceive is sadness, and I believe that's all. It is really challenging for a father and a player, but we will deal with it and support our teammates through it."

There is a lot of anguish and disappointment, according to Valverde. "Both the coaching staff and the players make up a very strong bunch. Everybody's family was there to support us at all times.

"It's quite disappointing that people didn't encourage and support us during our challenging moments. We regret not bringing the nation the happiness it deserves."