Synopsis
One of the bandits was killed by the soldiers during a battle. 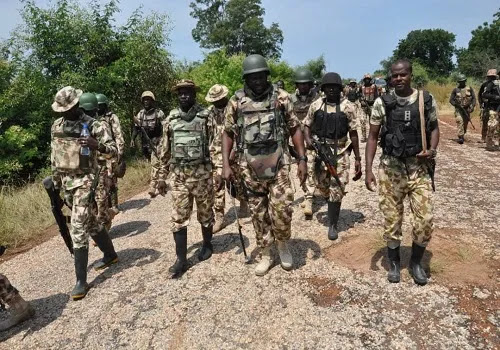 16 people who were abducted by bandits on the Birning Gwari-Kaduna Road in the Birning Gwari and Igabi Local Government Areas of Kaduna State have been freed by Nigerian Army soldiers as part of Operation Forest Sanity.

In a statement released on Tuesday, the State Commissioner for Internal Security and Home Affairs, Samuel Aruwan, said the military had responded to a distress call along the Udawa-Manini axis of the Birnin Gwari-Kaduna Road. They had stopped an attack and saved 16 people in the process.

He clarified that some of the injured rescuees were taken right away to the hospital for care.

Similar to this, Operation Forest Sanity soldiers reacted to a second distress call from Gonan Doctor village in the Igabi Local Government Area and ambushed a bandit crossing point in Maraban Huda village.

One of the bandits was killed by the soldiers during a battle.

A kidnapped victim was freed and taken to the Jaji Military Cantonment Hospital for treatment during the encounter with the bandits, and one of the criminals' functioning motorcycles was found.

Additionally, soldiers of Operation Forest Sanity set up ambush positions around Mangoro general area near Chikun-Birnin Gwari LGA, on the border with Shiroro LGA of neighbouring Niger State, in response to credible intelligence of bandits' activities around an interstate boundary area.

Two bandits were slain when the troops fought the oncoming robbers. Ten motorcycles, an AK-47 rifle, a pump-action gun, an IED, a Baofeng radio, and other items were also found.